Your shopping basket is empty!

There was then urgency for a new supplier to take over.

With a group of very experienced, specialized and passionate workers, they studied the need of the market, designed, produced and launched the new Gam line of figure skate boots and outfits.

The new company borrowed technologies being used in the hockey industry and applied them to the Gam line, offering skaters improvements they had not seen before.

Over the years, Gam has continued its innovation while keeping the traditional basic structure of the leather boot, the best material to mold to the foot, allowing the skater to feel the ice better.

To complete its commitment to provide skaters with the best equipment at every level of skating, Gam continued its development and created a complete line of blades.

Technicians and professionals identified 8 different parts of the skate blade that should vary depending on the level of skating. These variations were applied in the best configurations to answer the demands of skaters at each level of skating.

Each blade model features a unique and logical progression of the basic configuration and is also proportionate with its size.

What started as small company in answer to an urgent situation, GAM figure skates now has world-wide distribution and continue to be the choice of skaters all over the world. 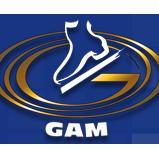